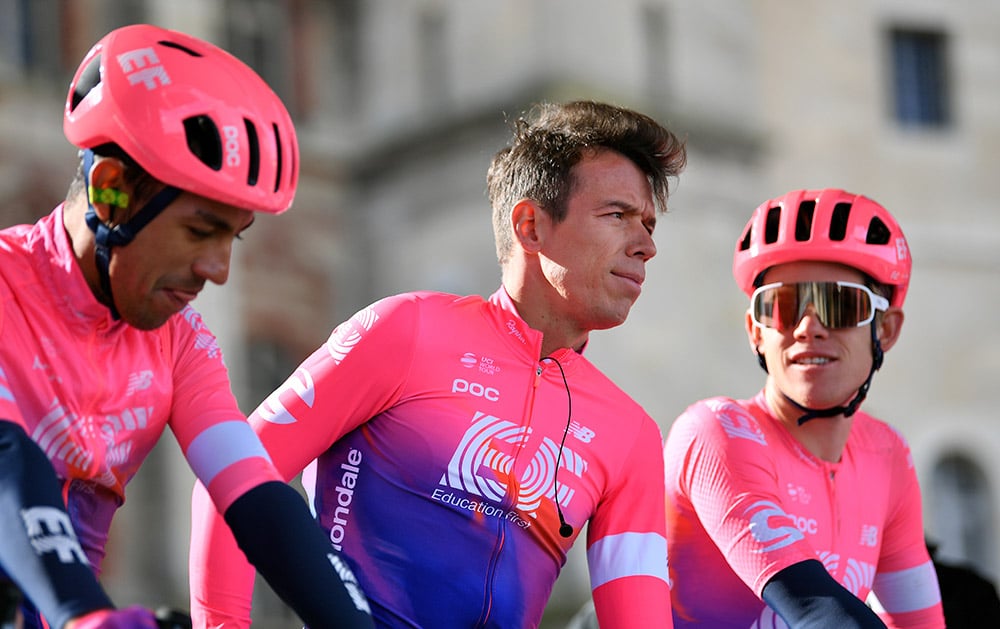 When our Pro Cycling team snagged the title in the Tour of Colombia this February, all their training, collaboration, and skill united into a moment of triumph. To have their achievements recognized doesn’t just matter to them, it humbles and spurs them on to do even better.

This win is yet another huge accolade for our pro riders. In 2017, just before we partnered with them, they had the youngest roster of the season – and one of the lowest budgets. In the same year, they competed with some of the biggest and best-backed riders. As a collective of sportsmen from all over the world, they work together to achieve a common goal. They’re about global teamwork. Just like us.

The diversity among our team has always stood out to us. What we do crosses oceans and mountains, touching every corner of the globe. The riders on our team echo this worldwide reach – they’re American, Australian, Colombian, Canadian, Italian, Norwegian, Mexican… they’re the very definition of diversity. Together, they demonstrate that as humans we connect regardless of origin and language. Yet, with English language skills, it empowers us.

It’s all down to communication, diversity, and hard work

Our pro team includes up to 30 riders representing 17 nationalities. They’re united through the first love of racing. And also, the need to speak fluent English. Three of the team’s riders have found fast results doing this with us. Results that help not only in their profession but with opportunity, friends, family.

Sergio, Dani, and Rigo learn English using EF English Live. They join teachers online from anywhere, at any time, and go at their pace – not necessarily the same as they pedal.

The flexibility our teachers and platform give fits into the riders’ lifestyle perfectly. Crucially, it also means they can communicate not just with one another, but with coaches, chefs, directors, massage therapists, and mechanics. Without riders, there might not be a team to compete. But, without the extensive crew that supports them, there would be no riders. It’s paramount that everyone can communicate in English.

Sergio Higuita started competing at only 5 years old. A physical education teacher encouraged and signed him up for Periodico El Mundo, a race organized by a local newspaper. He took part with the support of his father.

The race became an annual event for Sergio – each year pushing himself further. The training was tough; “Truthfully, it was very difficult”, he admits. His father and many of the people around him helped him to keep going. Enough so that he was able to make the leap into professional cycling. This too brought many challenges, especially as competing meant travelling around the world. And also the need to communicate in English with his teammates, coaches, and directors.

“It’s mind-blowing to be able to have interviews in English and to have the confidence to speak with others in English in such a short time. This learning experience with EF English Live has been very important to me. It’s made my life 100% better.”

Fellow rider Alex Howes helped train Sergio when he joined the EF Pro team in 2019. “I don’t think he said anything… maybe he said ‘hello’ in English? We were really leaning on my rudimentary Spanish”, he remembers.

A lot got lost in translation. And then pretty quickly, I saw him at the next race and thought hey, this guy’s speaking English in full sentences and laughing at the table. It was pretty impressive.”

Proud Colombian and cyclist Dani Martinez has represented his country in many races; from the World Championships to the Pan-American Games.

Dani’s drive to push himself is commendable, even in the face of misfortune. In a 2018 mid-season crash, he broke both his hands. It forced him off our Tour de France roster. Once fully recovered he came back even stronger. In 2019 he took his first World Tour to win on the final stage of Paris-Nice. He also won his first national title; the Colombian time trial championship.

Cyclist, climber, time-trialist… Dani is a serial achiever. So when it came to learning English he applied himself immediately. Studying wherever and whenever he could. Practice and the encouragement of his rider friends accelerated his learning curve and confidence.

“I have learned English so much faster with EF English Live. With the teachers they have and the classes I can take anywhere, learning is much more simple.I’m also learning English more quickly because I’m surrounded by teammates who speak English all day”

Every country Dani visits brings him an opportunity. The chance to immerse himself in local culture and improve his English. “The best thing about cycling is that you travel so much. You see different ways of doing things. The culture, the discipline. Knowing all that helps you a lot and allows you to grow as a person. In every country, English helps you to communicate with other people.”

Colombian Rigoberto Urán has won 16 races in his 13 years as a professional. This includes a stage of the 2013 Giro d’Italia and a stage of the 2017 Tour de France. He has twice finished second overall at the Giro. He earned the silver medal at the 2012 London Olympic Games Road Race. Yet, he’s quick to admit, “my success required a lot of sacrifice and dedication.” At just 14 years old, Rigo supported his family all by himself. Understandably, it meant he grew up and matured faster than many. It also taught him to seize opportunities with gusto.

These early tests paved the way for Rigo’s destiny as a team leader of the pro cyclists. He takes great pride in inspiring, mentoring and supporting young riders. He recognises how important it is they have good communication with the rest of the staff. Without understanding one another and uniting in English, competing in Tour de France and other races becomes only a dream.

“I don’t think at 14 I could have imagined the life I have now. Cycling has taken me very far. Every day I take the opportunity to keep working, learning, and growing.”

Learning English has been life-changing for Rigo – in his personal life and with his business. It’s opened up new markets and international clients and allows him to explore new ventures where he can share the story of the pro team further. Championing their sport and mission to billions of people worldwide.

Continual learning, diversity and communication is what matters most

Winning the Tour of Colombia is an enormous achievement for our pro riders. But it’s about so much more than just racking up the big wins.

Independently as well as together, the team has come such a long way. Some from humble beginnings. Yet, they never want to stop learning. And as a group from all over the world, they are a testament that diversity and communication are what really matters. They are not the only key to success, but key to a fuller life. What can I learn about British history by watching movies? How To be Polite in English