Key words for talking about art in English 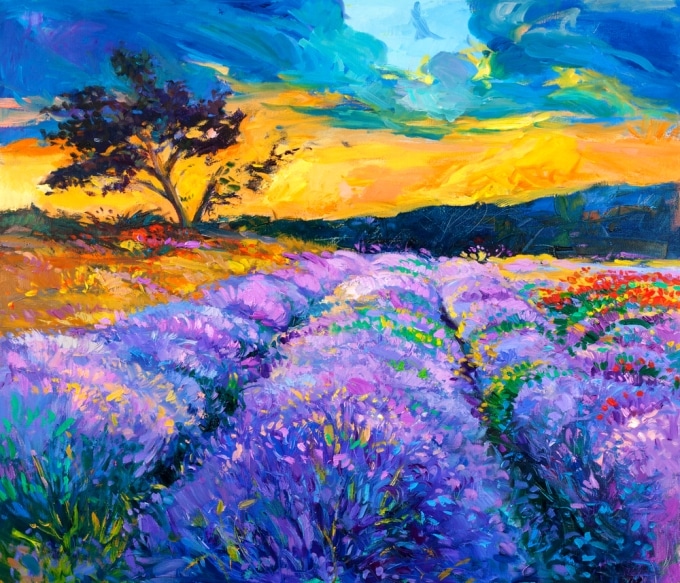 For many people there is nothing more highbrow (meaning cultured and intellectual) than having knowledge of the art world.  Although it’s largely a matter of opinion and preference, having the words to describe the art you see can be a useful and impressive skill.  Here’s our pick of the key words you can use when describing art.

Abstract means ‘nonfigurative’ or ‘in the mind’ and abstract art refers to anything that exists independently from a recognisable thing in the world, such as a face or tree, instead focusing on form, colour or shape.   It expresses the artist’s ideas or feelings rather than depicting the exact appearance of a physical object.  The abstract movement was really a response to the fundamental changes happening at the end of the 19th century when many artists felt compelled to develop a new form of art to reflect the changes in science, technology and philosophy.  Essential abstract artists include Wassily Kandinsky, Mark Rothko and Jackson Pollock.

This is a great word to use at an art exhibition.  All art is concerned with beauty and the study of the principles of beauty, and the word aesthetic means just that; the creation and appreciation of beauty.  It can also be used as a noun to describe the set of principles underlying the work of a particular artist or artistic movement such as the abstract or cubist aesthetic.  The word stems from a branch of philosophy dealing with the nature of art, beauty and taste and is part of the study of the sensory.

This word, from the French ‘advance guard’ or ‘vanguard’, is used to describe art that is experimental or innovative.  Avant-garde pushes the boundaries of what is acceptable and breaks with the status quo (current situation).  It may shock an audience because it is so different from what has gone before.  Many artists aligned themselves with the avant-garde movement and continue to do so today, inspiring not only painted works but art installations, music, theatre, film and literature.  Essential avant-garde artists include Salvador Dali, Andy Warhol and Yoko Ono.

Cubist art relates to an early 20th century style of painting in which the artist paints several different views of a person or object in a single painting, usually using straight lines.  Cubism was part of the avant-garde movement pioneered by Georges Braque and Pablo Picasso.  The style of cubism transformed European painting and sculpture and inspired movements in music, literature and architecture.  Cubism is widely considered the most influential art movement of the 20th century.

The word evocative means strongly suggestive or reminiscent of something and an evocative piece of art expresses something very clearly, causing the viewer to have a very strong reaction to it.  Another great word to use to define a piece of art, it really is a powerful way of describing the bringing to mind strong images, memories or feelings.

The minimalist movement originated in New York City in the late 1960s and was really the culmination of the reductionist leanings that had been surfacing since the turn of the century.  Minimalism emphasised the extreme simplification of form by use of basic shapes and one-colour palettes of primary colours, objectivity and anonymity of style, often rendering the works unrecognisable to the viewer.  Minimalism takes only the essential elements to create a work and is most notable for its absence!  Essential minimalism artists include Donald Judd, Sol LeWitt and Dan Flavin.

Postmodern art is easiest to describe as modern day art that utilises non-traditional methods to create the final piece.  This can be anything from the use of spray cans or multimedia techniques such as video, to pickling a shark in formaldehyde.   Postmodern art blurs the boundaries between fine and ‘high arts’ and low art and pop culture.   It might recycle past styles and themes or re-appropriate them for a modern context.  It’s also sure to create some form of controversy along the way.  Essential postmodern artists include David Hockney, Damien Hirst and Banksy.

A seminal piece of art, writing or music is a new and different work that influences other works that come after it.  If you’re lucky enough to see a piece of art that is deemed ‘seminal’ then you’re witnessing something very special indeed.  Furthermore, if you deem a piece of art seminal yourself, then you are experiencing an internal moment of realisation that might be considered ‘ground breaking’ or ‘life changing’!